C J Murfitt are progressing well; now into phase 3, the fitting out; aiming for handover in early September.  Much of the internal pipework, including for the underfloor heating, has been laid and the floor screed and external panelling under way now.  First-fit electrical stuff is beginning and our kitchen crew have approved the electrical layout. Sample of the kitchen furniture is available.  Access roadway specification now nearly finalised.  The project is still expected to be within budget envelope.  Opening provisionally set for 10th October with work to be done on format and invitations etc.

We’re really taking shape. The roof trusses are nearly all on so you can now see the size and scale and of the building. There is a short (possibly 2-week) delay anticipated following wind-post / roller-shutter misalignment. 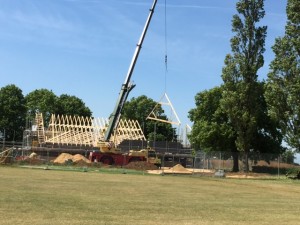 So far so good. The brickwork is going up well and the roof trusses have now arrived on site.  We’re currently looking at options for finishing off of the access road and a ‘shopping list’ of final fit items has been drawn up. 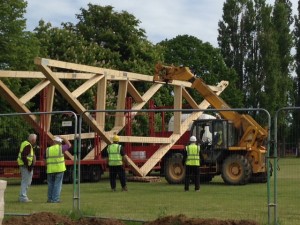 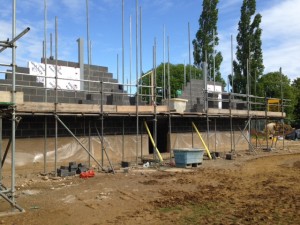 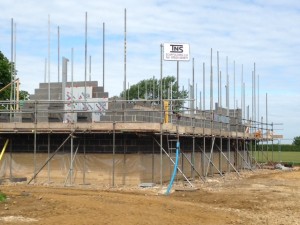 Durman Stearn have now finished the majority of their works and we are now entering phase 2, with the site handed over to CJ Murfitt.  There will be some overlapping between the 2 contractors for the next few weeks.  The brickwork is already starting to go up and a trench is currently being dug along the tree line for the electricity cable.

Foundation work is progressing well and we’re even tiny bit ahead of schedule! 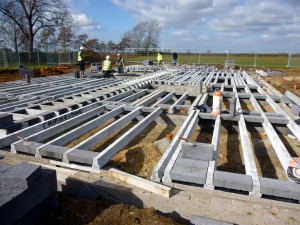 Work is progressing well and Durman Stearn are working on installing the access road. 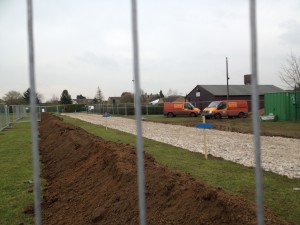 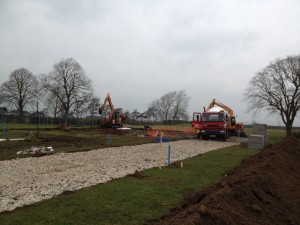 A full meeting has now been held with the architects, contractors and engineers and a start date of Monday 2nd February 2015 agreed!  Durman Stearn will be on site for 9 weeks followed by CJ Murfitt for a further 21 weeks.  Estimated completion late August/September.

We are pleased to announce that we have now been given the go ahead by both of our funding bodies, Sport England (£50k) and the Football Foundation (£300k) to start work on this project.  Durman Stearn (groundworks) are expected to commence in January and will last approximately 2 months. CJ Murfitt (builders) will then be in situ for 5 months with an expected completion in August.

Wilby & Burnett, our architects, will now send out letters of acceptance of tender. We have appointed a qualified Contract Administrator (and Consulting Engineers) who will use a JCT (joint contracts tribunal) contract to track progress and earned value (with retainers).  Both Durman Stearn and CJ Murfitt will have their own site managers.  There will also be a CDM co-ordinator.  Cllrs Morris and Mudd will continue to oversee the project.

In terms of costs we are looking at a total of £640k, with £390k received in grants.  The sports clubs have also raised several thousand pounds towards the project costs and are pushing ahead with further fundraising activities over the coming months. We have already spent approximately £40k on fees and engineers reports (reflected in the total costs).  The balance of the project will be funded by existing Council reserves and will therefore have no effect on the forthcoming precept setting.

At our full Council meeting on Tuesday 4th November the following was agreed:

Resolution to authorise Cllrs Morris and Mudd, with the Clerk or RFO as required, to take all necessary steps to negotiate, place and supervise contracts for the building of the new Changing Rooms on the basis of a net input of no more than £250k of CPC funds excluding grants + VAT. Authorise Cllrs Morris & Mudd to:

Guarantee to support the New Changing Rooms project with up to £250K from Council funds.

Further meetings are scheduled with the architects and preferred contractors to finalise figures and contracts.  The aim is to start groundworks in the next month, with a completion of summer 2015.

An Extraordinary meeting was held on Tuesday 30th September to take forward the procurement strategy for the project.  At the meeting the following was agreed.

The tenders will be opened on Friday 31st October with the results presented to full Council at our meeting on 4th November.

Click here for a link to the Full planning application

Background information to the need for the project is contained within the Business Plan.