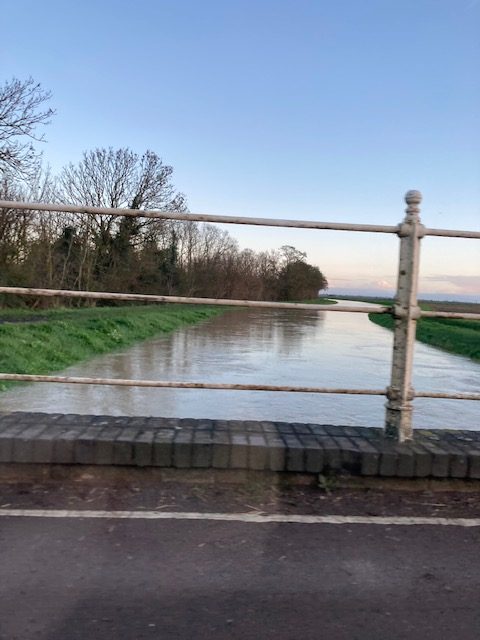 Even when it rains and the odd puddle settles by the roadside most of us forget that we live in a shallow bath-tub from which almost all our rainwater has to escape into the River Ouse through a funnel in the north-east corner of the parish at Chear Fen. Even then “our water” has to compete with water already in the Ouse and coming from the west across the Bedford Levels or from the south-west in the Cottenham Lode. Fortunately most of the two rivers, managed by the Environment Agency, are embanked so the risk of flooding from them is quite low, despite their water level being much higher than that in the village and surrounding fields.

Cottenham’s rainwater disperses into the network of ditches and drains across our fields and, without assistance, would gradually fill up our bath-tub, first cutting off our roads then – eventually – flood many of our houses. Our foul water (sewage) usually follows a different path with two pumps driving it down to the water treatment works at Milton.

This Christmas the Environment Agency had to cope with extensive flooding across the Bedford Levels driving much more water than usual into the Great Ouse even when the Bedford Washes were used to hold back massive amounts of water in the low land at Earith, Sutton Gault and further north to Denver and Welney. Cottenham Lode itself was flowing with very high levels of water from the land around Dry Drayton, Northstowe and Oakington. The strong wind did not help.

Our local Drainage Board – the Old West Internal Drainage Board – is responsible for draining the land to the north of Cottenham. They and their colleagues throughout the Ely Group of IDBs had to work flat out (think 18 hour shifts!) for several days and nights to keep the pumps at Queenholme and Chear Fen in operation over the Christmas holiday in the face of several equipment failures and substitutions. Most missed their own Christmas lunch and a lot of time with their families. Staff from the Amey plant at Waterbeach and even Mick George himself (head of the haulier business) were there personally to lend a hand to the IDB and some local farmers when the going got really tough. Their work continued for several days, borrowing and deploying additional pipes and pumps, and repairing the damaged pumps.

We did not escape completely, of course. The level in the Lode prevented surface water around Broad Lane and Histon Road from escaping as fast as it should from low-lying areas, although the Balancing Ponds worked well, as did almost all the highway gullies following their jetting in recent weeks. The Cottenham fire crew answered several 999 calls to pump away water about to enter houses in the village. Unfortunately, they were not always successful.

Although this incident was the worst in living memory, the Parish Council is working on measures  to reduce the future risk, as it could happen again. If you had a problem – or a near miss – this time or in the summer, please do what you can to protect yourself and your property. Sand bags and other flood protection equipment can be obtained from a variety of companies. Here are some companies you may wish to contact for further information: